......actually we went to Gold Lake, which is about an hour north of Truckee, California. It's a beautiful place. In fact this was my view for the better part of a week. We didn't get the same site as last year, but it worked to our benefit. 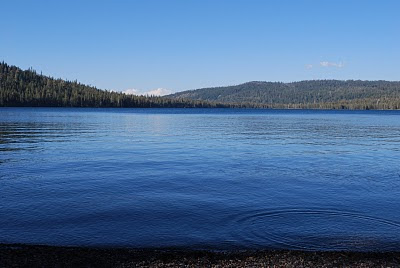 This time we camped out 2 campsites away from our original site and had a nice stream, of snow melt, going right past our campground. 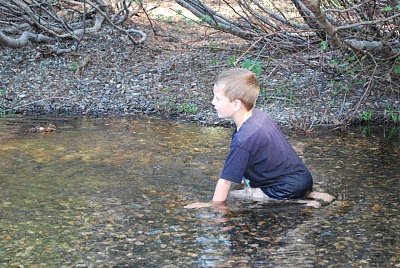 Adam spent a great deal of time in that stream. He couldn't get enough of it. 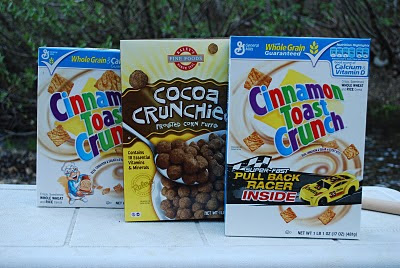 I don't ordinarily give them "crap" for cereal, but you know camping is a big deal and I let them choose their own breakfast cereal. I call it the Breakfast of Champions.....NOT! 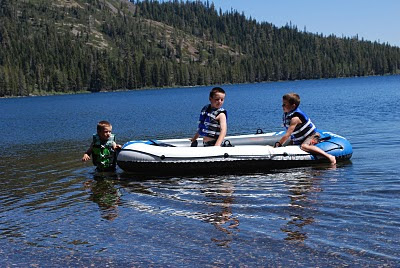 We were a little more prepared this year, we bought an inflatable boat and got the boys a life vest so they could go "boating" in the lake. They didn't go very far but had a blast doing it. Adam is my more adventurous one, Trevor was ready to bail out because Adam was taking the boat out too deep. 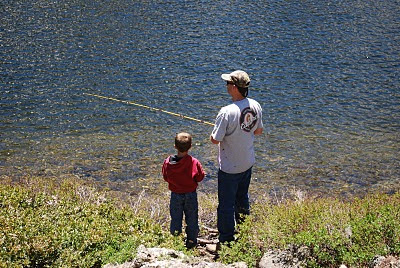 The fishing wasn't quite as good this year, but we had fun trying. 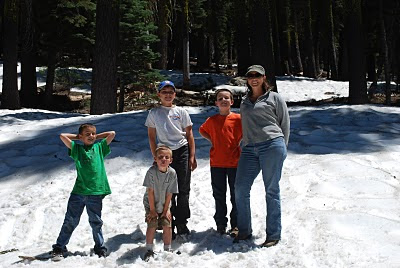 Yes, lots of snow on the ground still. 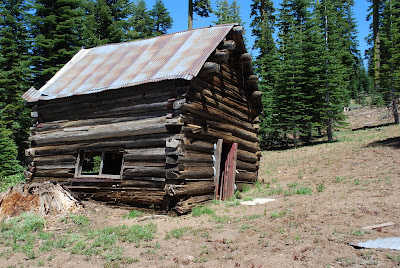 Some old cabins we came across while 4 wheeling. They are in bad shape, but pretty neat to check out. 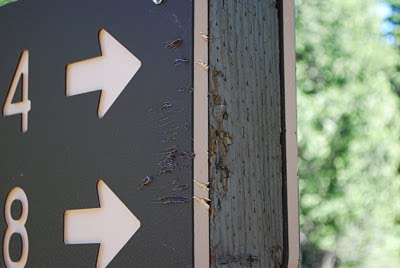 Them marks there? BEAR! Someone was hungry..... 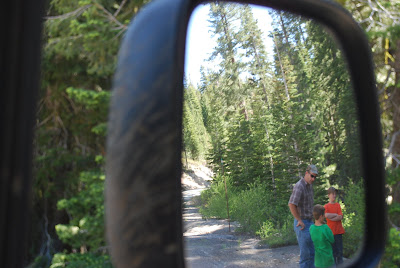 It seemed like every time we got in the Jeep to go exploring the boys would break out in a fight, start bickering, nit pick about anything and everything. Jeff had enough and was scolding 2 of them on the side of the road. Had to take a picture. 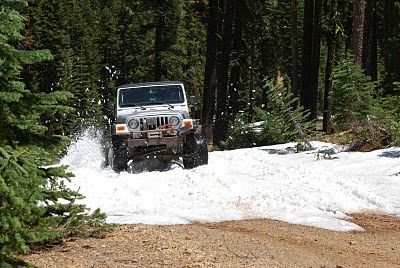 A bit of 4 wheeling. 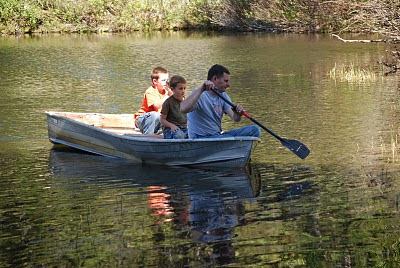 Last year we 4 wheeled to a lake called Smith Lake and found an old aluminum boat. I had a few holes but was water safe. So this year we went back to the lake for 2 reasons......there was a boat and the fishing was incredible. We decided we would catch and release, we still had a ton of food back at camp. So this year we did not have any fresh fish. A little sad (because it's soooooo good), but a longer life for those native fish to live and reproduce. 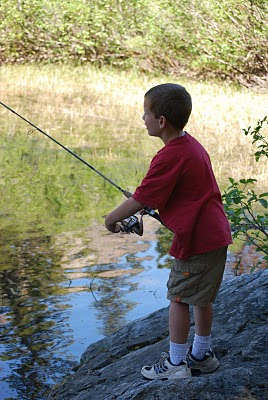 Adam reeling his in at Smith Lake. 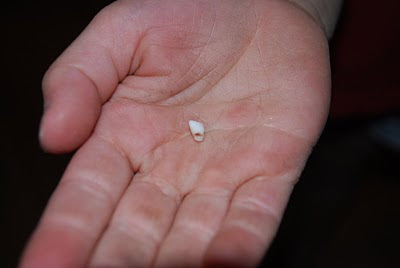 The bonus of this trip? Adam lost his first tooth. (Don't mind the grubby little mits....it was a week of no showering and this is on our way out.)
Posted by Suzi at 3:25 PM 3 comments

I know that I can talk loud, I mean it's hard not to when there are 3 boys who can drown the sound of my voice out, and it's easy to eavesdrop overhear what I am telling said boys. However when you kindly tell me what you think about my conversation with the boys I consider it crossing the line. I like to let my boys know what is going on and what to expect, especially when it comes to our new puppy.

I like to let them know that the first thing we do when we get home is let her out and take her to her potty spot so she can take care of business. I also like to get errands done in a timely manner so she isn't stuck in the crate for long periods of time.....and I explain that to the boys. When you, fellow shopper, ask me "Where is your dog?" and I answer "At home in her crate." and then respond with an "Oh, I don't like that." I don't really care.

I have to say I was rather polite to you and told you that is how we do things at our house. However I wanted to tell you that I could bring said puppy to your house and you could leave her unsupervised while you ran errands. I know you would have loved what you came home to.....a giant mess! Since you know so much about puppies then you won't mind her eliminating where she wants, chew on anything she wants, and has her way with your house and your things. So please let me know when you would like me to bring her over, I'm sure she would have a field day. 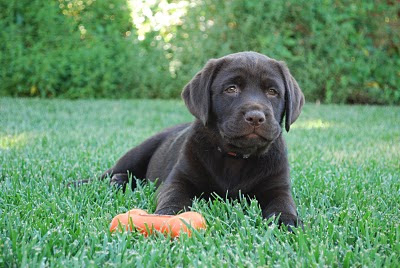 Sincerely,
Suzi and Scout
Posted by Suzi at 4:30 PM 9 comments

Not too long ago I bought a Le Creuset Ductch Oven. I LOVE it and found myself asking why I didn't buy one sooner. It is in their new color called Caribbean Blue and it is beautiful. A friend of mine suggested I make a Paula Deen's Dutch Oven Peach Cobbler. I thought that was a great idea.

Drain 1 can peaches. Combine both cans of peaches, including the juice from undrained can, the blueberries, if using, the baking mix, sugar, and a sprinkling of cinnamon. Place this mixture into the Dutch Oven.

To make topping: Combine biscuit mix, sugar, butter, and milk in resealable plastic bag. Drop bits of dough, using your fingers, on top of the peaches. Sprinkle with cinnamon sugar.
Place Dutch Oven into preheated oven and bake for 45 minutes, until top is golden brown and crusty.
Before the oven

Top with a scoop of vanilla ice cream and it is delish!

You won't be disappointed. My kids wanted seconds....it's that good.
Posted by Suzi at 1:34 AM 31 comments

Ever hear of this?

It is held in 18 cities across the United States. Love this race. It's fun, dirty, and well, fun. In order to participate you must have a partner. This is how it works: one of you runs while the other bikes, at a certain point you have to go through a small obstical course and then the runner becomes the biker while the biker becomes the runner. It is about 6 miles long and there are 5 or 6 obsticals before you hit the mud pit. Good times!

This is the infamous Mud Pit. It is said that every year someone loses their wedding ring or car key. That stuff is so thick and sloppy. It was made just for kids. But in this case the big kids are the ones having all the fun.

As you can see we couldn't seem to stay clean. I always heard mud is good for the skin.

This year I joined the many who have lost a wedding ring or car key, but I lost mine on the trail somewhere. I lost my key, so I called hubby from the Ranger's Office (no cell service at this race) and waited patiently while he and the boys brought me a spare.
Posted by Suzi at 2:09 AM 1 comments

I hope everyone had a wonderful 4th of July.
We spent our 4th of July unpacking from our camping trip (more on that later) and setting up our pool. Yes, it is an above ground pool. We call it the "Ghetto/Redneck" pool. Please don't take offense.....it's just that we live in an area where this type of pool IS considered "Ghetto/Redneck" and I'm okay with that. After all it's about cooling off and giving the kids another source of tiring themselves out. 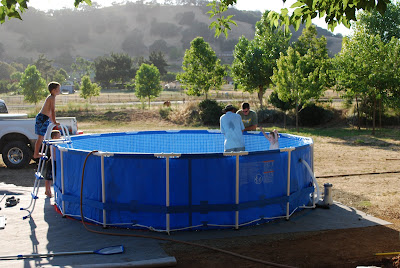 The men putting it together. Did you notice what it is sitting on? Classy, don't ya think? 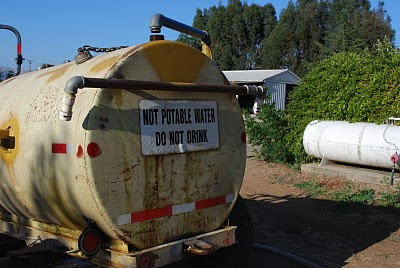 Our way of filling it. Yes, a water wagon. My hubby uses it on some of his jobs and it was perfect for filling the pool quickly. After all the hose would probably take all night, the pool holds a bit more than 3,000 gallons. 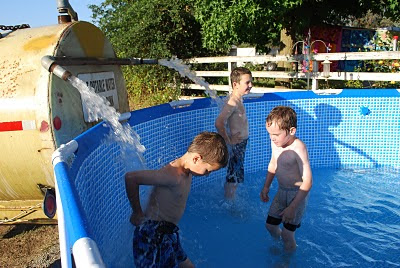 The boys standing under the jets of the water wagon. They are loving it! 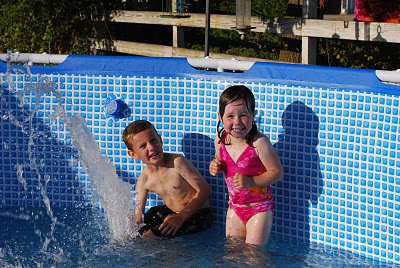 Random Thoughts That Make Me Giggle

My sister lives too far away. She lives in Australia and I miss her very much. So when she sends me emails like this it gives me a giggle. Enjoy!

Random Thoughts for the Day:

1. I think part of a best friend's job should be to immediately clear your computer's history if you die.

2. Nothing sucks more than that moment during an argument when you realize you're wrong.

3. I totally take back all those times I didn't want to nap when I was younger.

4. There is great need for a sarcasm font.

5. How the hell are you supposed to fold a fitted sheet?

7. Map Quest needs to start their directions on #5. I'm pretty sure I know how to get out of my damn neighborhood.

8. Obituaries would be a lot more interesting if they told you how the person died.

9. I can't remember the last time I wasn't at least kind of tired.

11. You never know when it will strike, but there comes a moment at work when you know that you just aren't going to do anything productive for the rest of the day.

12. Can we all just agree to ignore whatever comes after Blu Ray? I don't want to have to restart my collection...again.

13. I'm always slightly terrified when I exit out of Word and it asks me if I want to save any changes to the ten-page paper that I swear I did not make any changes to.

14. "Do not machine wash or tumble dry" means I will never wash this -- ever.

15. I hate it when I miss a call by the last ring (Hello? Hello? Damn it!)but when I immediately call back it rings nine times and goes to voicemail. What'd you do after I didn't answer? Drop the phone and run away?

16. I hate leaving my house confident and looking good and then not seeing anyone of importance the entire day. What a waste.

17. I keep some people's phone numbers in my phone just so I know not to answer when they call.

18. My 4-year old son asked me in the car the other day "Dad what would happen if you ran over a ninja?" How do I respond to that?

19. I think the freezer deserves a light as well..

20. I disagree with Kay Jewelers. I would bet on any given Friday or Saturday night more kisses begin with a bud light than Kay.
Posted by Suzi at 8:16 AM 2 comments

Suzi
Hi! My name is Suzi. I am a SAHM of 3 boys who keep me busy with school and sports. I enjoy exercising, gardening, canning home preserves, baking, and quilting. I do the invoicing, and all things QBP for my husband's business.

Archives for the Savvy 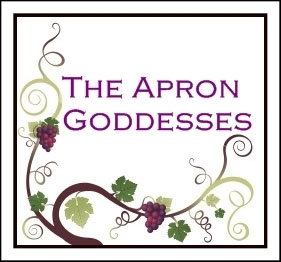